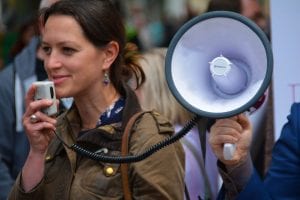 Of course, you could hear your voice in the recording. And you, of course, were surprised by its sound, because it sounds completely different than what you hear it.

Different people have this perception differently – some people think that his voice in the recording sounds higher, someone – lower, but it’s always quite different from what they hear themselves when they say. As for young children, they, more often than not, are not at all able to recognize their voice in the recording.

What is the correct voice? Strangely enough, both. These two different sounds are one and the same your voice. This is how the speech therapist and professional voice producer of Hollywood actors explains the process of voice formation and perception, Nelson Vaughan: “Listening to your voice during the conversation, we perceive it not only with our ears. We hear sound waves propagating inside us, through a fluid filling internal organs.
Speech begins in the larynx, from which sound vibrations emanate. Some of these vibrations spread through the air. This is exactly what others hear when we talk, and what is recorded, for example, by a dictaphone. Another part of the vibrations passes through the liquids and various tissues of our head. The inner and middle ear are located in the bony cavities. The inner ear contains liquid, and the middle one – air, and both are in constant compression. The larynx, in turn, is enclosed in a soft tissue, also containing a liquid. Through the air, sound spreads differently than in liquids and dense tissues. This difference applies to almost the entire width of the tones that we perceive, so people around you do not hear what we hear.
The study can not prove that the voice that we hear (our “inner” voice) is necessarily higher or lower than the one that is heard by others (the “outer” voice). Therefore, we can say that in fact we have two votes. And both of them are our “real” voices. Everything depends on the ear of the person who listens. ”