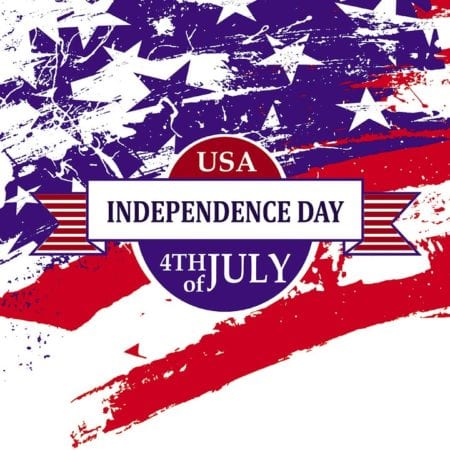 The US Independence Day, which, as is known, is celebrated on July 4 – the main holiday of the United States is actually the birthday of the nation, America’s birthday as a free and independent country.

The official name of the holiday is Independence Day, but most Americans call it simply by date – Fourth of July or July Fourth.

Why do we Celebrate Independence Day on the 4th of July?

According to official American historiography, on July 4, 1776, the United States Declaration of Independence was signed from the United Kingdom. It was a joint decision of 13 British colonies that were on the eastern coast of the North American continent and had fought with the sovereign for a long time. The fact is that enterprising colonists wanted to print their own money, but they did not want to pay taxes to the British crown with gold and silver.

As they say, word for word … a war began, which soon outgrew the private financial issue and turned into a war of independence from the mother country.

And on July 2, 1776, the Second Continental Congress, the representative organ of the rebellious colonies, approved the Declaration of Independence, a document in which the territories fighting for independence were first named the United States.

However, the final signing of the historic document took place two days later – on July 4. Two days were required for the coordination and elimination of various inaccuracies. July 4, 1776, this Declaration was signed by the leaders of the Continental Congress, among which were the founding fathers and future US presidents Thomas Jefferson and John Adams.

Jefferson and Adams, who in turn presided in the United States, died on the same day – July 4, 1826, on the 50th anniversary of the adoption of the historic declaration. Fifth US President James Monroe also died on July 4, but five years later – in 1831. And the thirtieth American president Calvin Kullidge was born on July 4, and it was in 1872.

How to celebrate the US Independence Day

The US Independence Day is an official holiday and a paid day off. The holiday is celebrated very widely – both at the official level and at home. As in many other countries – for Americans, Independence Day is an occasion to eat well and how to drink, preferably in nature. Therefore, in the course of picnics, barbecue and other pleasures in the open air format.

Parades, charity fairs, costumed processions and carnivals, concerts, sports, etc. take place across the country, as well as in places where many Americans live.

On this day, America is painted in the colors of the national flag – white, red and blue. Also in the fashion various star-striped outfits and accessories – from ties and socks, to hats and suits. At the same time Americans with a tear and not without an anguish sing the patriotic songs and, of course, the national anthem.

Exactly at noon on all US military bases arrange a “salute of unity” – for this solemnly fired from the main gun. And in the evening in all American cities and towns the sky lights up with breathtaking fireworks, some of which are even marked in the Guinness Book of Records as the most-most.

US Independence Day at the cinema

The films, related to the Independence Day of the USA, are many. The most famous are the fantastic action movie “Independence Day” in 1996, directed by Roland Emmerich, starring Will Smith. The film tells how on one bad day on July 4, a gang of unsympathetic aliens is attacking the Earth, who are making a lot of efforts to spoil the Americans with a holiday. The thing ends, the fact that everything is finally understood and understood – there is no such force that could prevent Americans from drinking and eating on Independence Day, at least, the creators of the film claim. By the way, in 2016 Emmerich made a remake of his own work.

Another famous film, dedicated to the Independence Day, is the powerful anti-war drama of Oliver Stone 1989 “Born on the Fourth of July”. It was after this film that the star of Tom Cruise appeared on the movie screen.