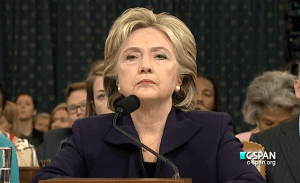 Julian Assange, the founder of WikiLeaks, is a controversial character. But there’s no denying the emails he has picked up from inside the Democrat Party are real, and he’s willing to expose Hillary Clinton.

Now, he’s announcing that Hillary Clinton and her State Department were actively arming Islamic jihadists, which includes the Islamic State (ISIS) in Syria.

Clinton has repeatedly denied these claims, including during multiple statements while under oath in front of the United States Senate.