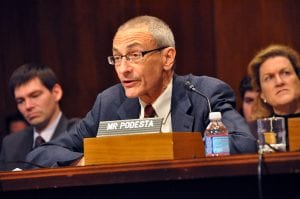 WikiLeaks Monday morning posted an additional 2,000 emails that appear to be from the account of Hillary Clinton‘s campaign chairman, John Podesta.

This is the second hack in four days from WikiLeaks, which claims it has a trove of more than 50,000 emails from Podesta.

The emails appear to be mostly from 2015, covering a litany of policy and strategy discussions between Clinton staffers on how to handle issues of the day and the press, including the release of the book “Clinton Cash” alleging nefarious activity by the Clinton Foundation. Another email has long-time Clinton aide Doug Band referring to Chelsea Clinton as a “spoiled brat.”
Read more …
Image credit: Mark Warner (Wikipedia)