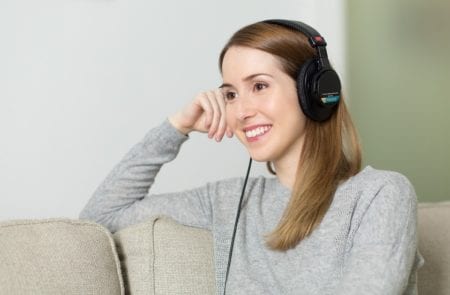 Listening to music has a beneficial effect on our health – it has a soothing effect on our emotions, can relieve pain, makes exercises more enjoyable, can even increase our intelligence. You just need to choose it to suit your needs.

This hackneyed saying is a sincere truth. A well-known song heard at the right moment can improve the mood and relieve the mental tension. Nothing reflects human feelings like music. If it is still associated with a certain, pleasant situation for us, its action can be compared to the action of the strongest sedatives. With the fact that the music has no side effects (if only we do not listen to it too loudly) and does not dull as many pharmaceuticals. This is why when we get a worse mood, we reach for a CD with a favorite song. And when we are in a good mood – we sing. Try to compile a list of recordings that you associate with pleasant moments (e.g. with a first date) and release it in times of worse well-being. There is no better cure for the drug.

… and strengthens your strength

Have you ever tried to lift the bar to the rhythm of your favorite piece of Metallica? True, the weight seems to be lighter? Many specialists believe that dynamic, energetic music increases muscle strength, while slow, sad music can temporarily reduce our strength.

Music can also increase motor skills – such as throwing, grabbing and jumping. An experiment was conducted with the participation of children, some of whom practiced listening to music and some in silence. It turned out that children playing with music, throwing, catching and jumping went out better than those who practiced without accompaniment. It is not without reason that most classes in fitness clubs take place with music.

Music has the ability to relieve chronic pain. According to some sources (e.g. Journal of Advanced Nursing) music can reduce it by as much as 21 percent. This was found on the basis of an experiment in which 60 people took part, complaining of persistent pains. The patients were divided into two groups – half of them listened to music for two hours a day, the other went through therapy without accompaniment. In the group listening to music, after a week there was a significant improvement, much higher than in the second group.

It may be related to the fact that we mentioned earlier – the music improves the mood, and the man in a positive mood can deal with all ailments and infections more easily. Negative energy can even slow down the healing process. Of course, this does not mean that music is a remedy for all pains, but it can help a lot as an additional element in the fight against chronic pain.

Listen to music and have good grades in learning

Many researchers believe that there is better communication between the right and left half of the brain in people who create and listen to music. Music is like an activator of mental processes taking place in the brain. This is particularly evident in the example of the so-called The “Mozart Effect” – it was stated that listening to classical music, especially the one written by Wolfgang Amadeus Mozart, increased the intelligence test results by one point. In another experiment conducted on rats, it was found that the animals to whom classical music was played better coped with the defeat of the labyrinth.

As to all revelations, so you have to be approached with caution. And with common sense, because listening to too loud music can, for example, damage our hearing. Nevertheless, it is worth taking advantage of the benefits of music. And it is worth remembering that not everyone reacts the same to the same music. Black Sabbath will be for one poetry, and Jan Sebastian Bach for the other. You have to choose something for yourself and listen.